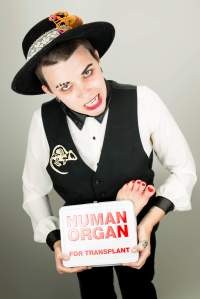 Amica – Funeral Director & Lead Embalmer
Amica Hunter is the mastermind and ringleader of Funerals For Life, and is actually nothing more than a bunch of thoughts and feelings trapped in a sack of wet, pulsing, bone-studded meat. An all-purpose weirdo and Creator of Things™, Amica’s interests include but are not limited to, dead things, bad movies, tree climbing, naps, gluing baby doll limbs to shoes, and stupid dancing. She has misophonia, so don’t ever eat popcorn near her, lest ye be sent to the grave prematurely. An expert in faking death, Amica has made it her life’s mission to give people the relaxing gift of attending thier own wake… Beside’s who WOULDN’T want to hear what people will have to say once they’ve passed away? 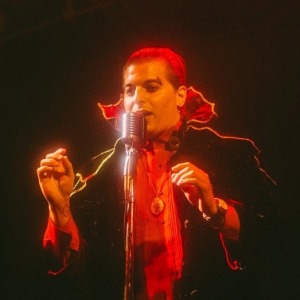 Malarki – Apprentice Embalmer & Powerful MentalistMark, or as he likes to be called, The Great and Powerful Malarki, fancies himself as a tour guide of The Paranormal. He used to be a tour guide of The Normal, but lost that job after a number of customer complaints. He only took the job at Funerals for Life because he wanted to expand his collection of bones, but little did he realize there wouldn’t be that opportunity at this funeral parlor. Now he is too embarrassed to quit. 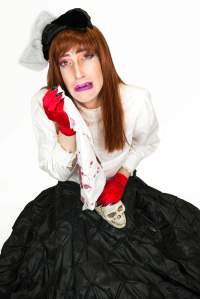 A direct descendant of Nostradamus, Mysteria is the world’s foremost psychic medium. Mysteria is here to assist you in transitioning from Earthside to the realm of mystery. You can hold her hand, but her nails are sharp. 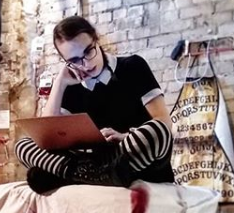 Hekate – Apprentice Embalmer & General Conjurer
Hekate V. Nichols is adventurous weasel floating between naïveté and cynicism. A roller-blading contradiction, who spends her nights nicking her hands up with the keen edged pieces of a shattered dream and contemplating gluing them back together as some sort of resplendently morbid cacophony of thought.